Personally I learned cangjie touch typing because it allowed me to type Traditional Chinese characters even if I didn't know their pronunciation. Plus I often found that for some sounds, there were lots of characters with that same sound and so I had to scan lots of lists to find the character that I wanted. While with cangjie codes there are some characters that share the same code, for the most part I can type the code, press enter and the desired character appears.

Thus I can "touch-type" in Chinese.

But what if you aren't interested in typing Chinese characters?

Chinese character lookup can be difficult

One of the difficulties with looking up Chinese characters is that you either have to know the sound/pronunciation or you have to be able to figure out its radical (or you can count strokes).

These methods are alright most of the time but occasionally there are frustrating characters whose radical isn't obvious, or whose stroke count could be 12 or 13 (for example) and so you have to check in multiple places to find the character. Things are easier these days with smart phones and electronic dictionaries, but even so I thought it would be interesting (helpful) to have an alternative means of looking up Chinese characters.

Because I was interested in learning to use Cangjie input codes to type Chinese symbols I created a dictionary of cangjie codes.

I sorted characters by their codes, and also by shape so that it was easier to look find a character even without knowing its full code. I realized in the process that this was actually useful as a general method for looking up Chinese characters. Hence the two cangjie indexes on this website.

The C1 index is for traditional Chinese characters.

The CS 1 is for Simplified Chinese characters.

The 1 in c1 indicates that these particular index uses the first element to sort characters.

One of the keys to learning the cangjie input system is memorizing the letter-symbol associations. Since there are only 24, this should be relatively easy. And it can be made easier with some simple associations.

The cangjie symbols are divided into groups. Knowing these groups isn't really necessary to learning the system, but you may find it gives you a simple way of dividing the symbols into groups so that you can memorize the elements of each group one group at a time.

The first two cangjie symbols are Sun日 and Moon月 and they are associated with the letters a and b respectively. 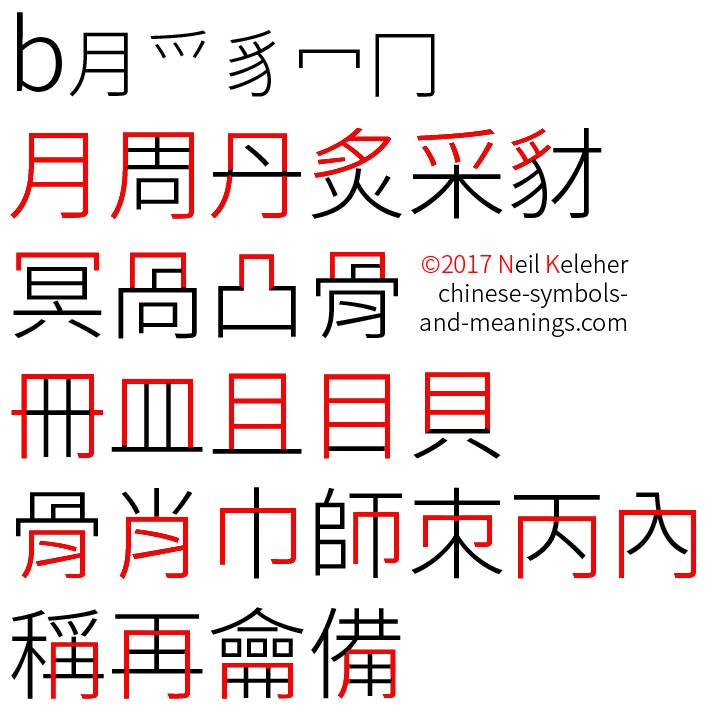 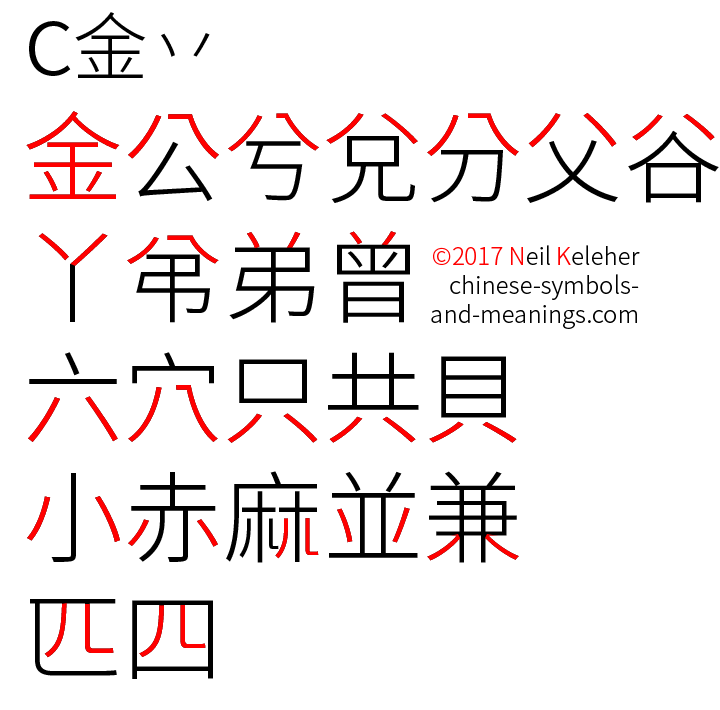 D is the first letter of Dead, Dead wood-木. 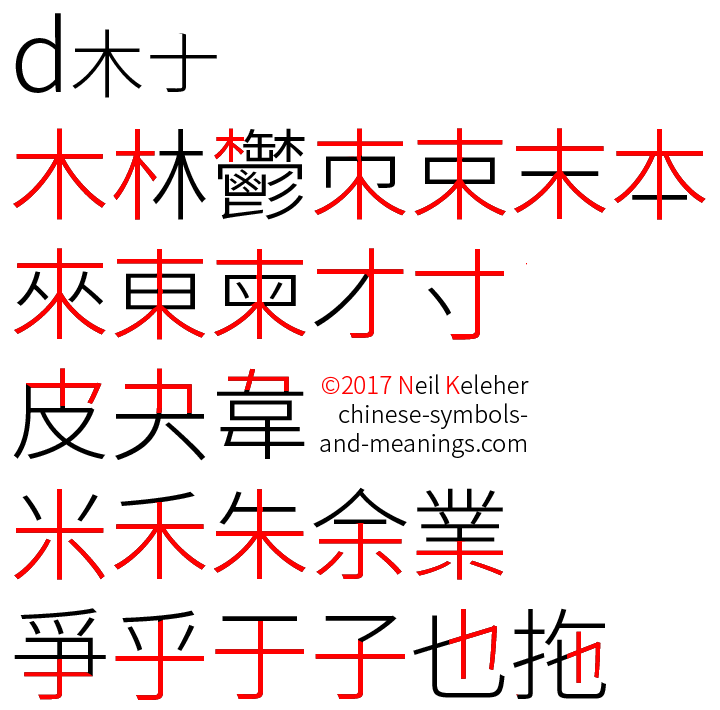 e-水, water, it flows and Ebbs

E is the first letter in the word Eternal. The character for Eternal is 永 which contains the element for water.

G is for Ground 土.

H, the element for bamboo 竹 looks like an H.

i, The weapon element 戈 is easy to associate with little i since there is a dot on top.

j-十, the cross and Jesus

J, For the cross stroke 十 think of Jesus on a cross (j).

K for this 大 which means big but also looks a little like a k turned on its side with the legs down.

l, The vertical stroke 中 looks like an l. 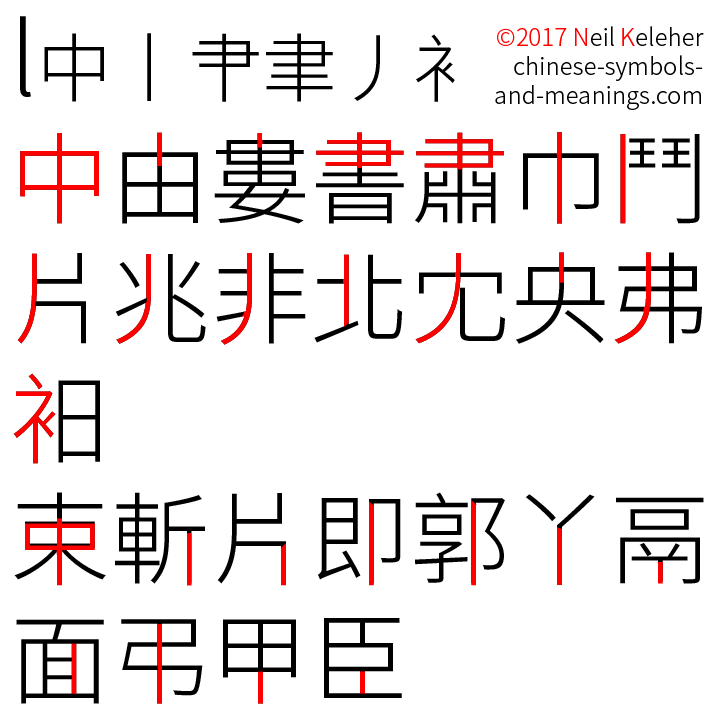 M, Meanwhile I associate the horizontal stroke 一, with the chinese word 面 which means surface, and is pronounced "Mian". 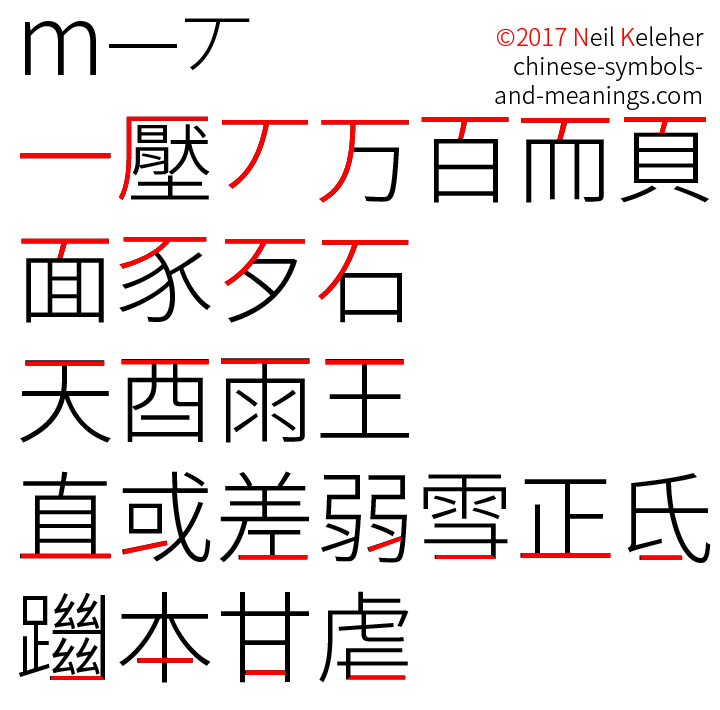 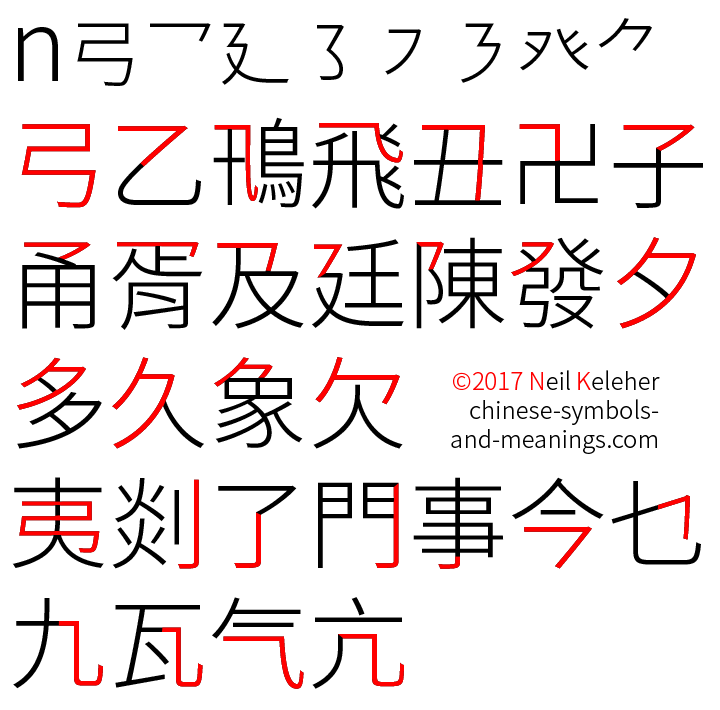 O, I can't think of how I remembered body or person 人 for o. "Oh" what is it? 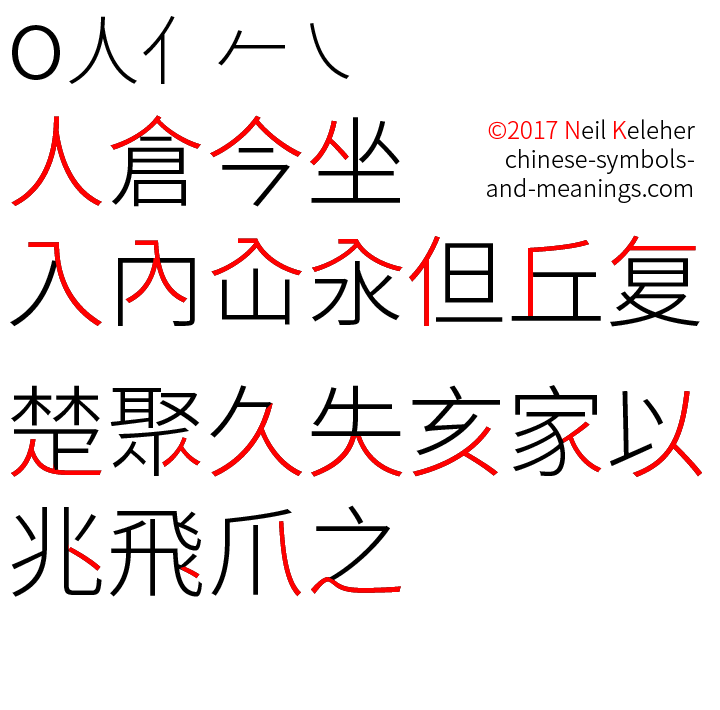 p-心, the heart is a Pump

p is for Ground 心.

q-手, (hold up your) hand for a Question

Q, As for hand 手, for some reason it just sticks that a hand looks like a Q. 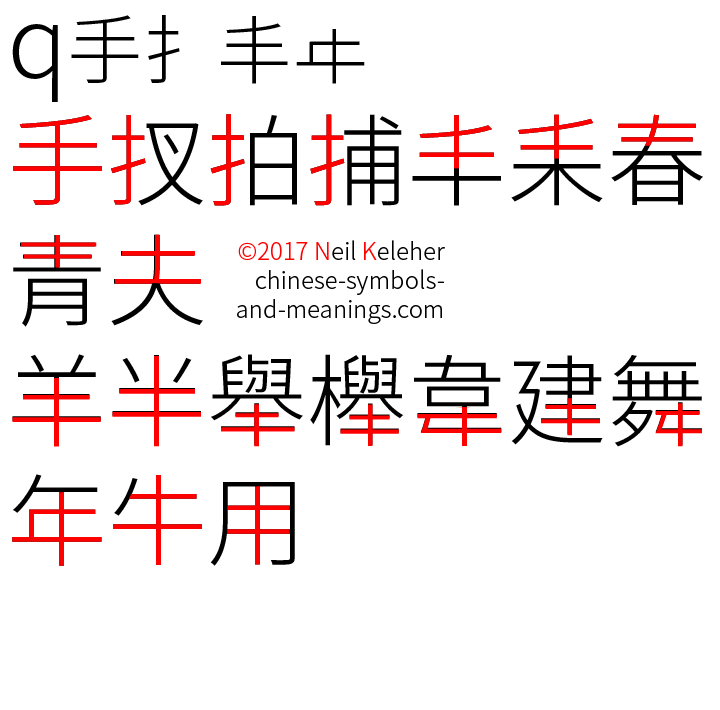 r-口, mouth, sort of like the shape at the top of an R

R, As for mouth 口, capital R has an "enclosed" shape at the top. 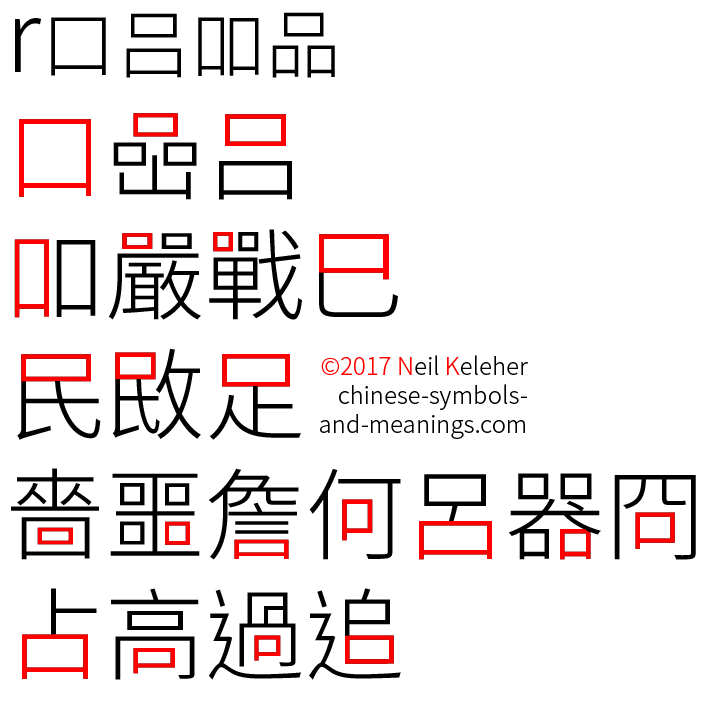 S, For s the element it represents 尸 (which is corpSe) but looks a little like the top of an s. 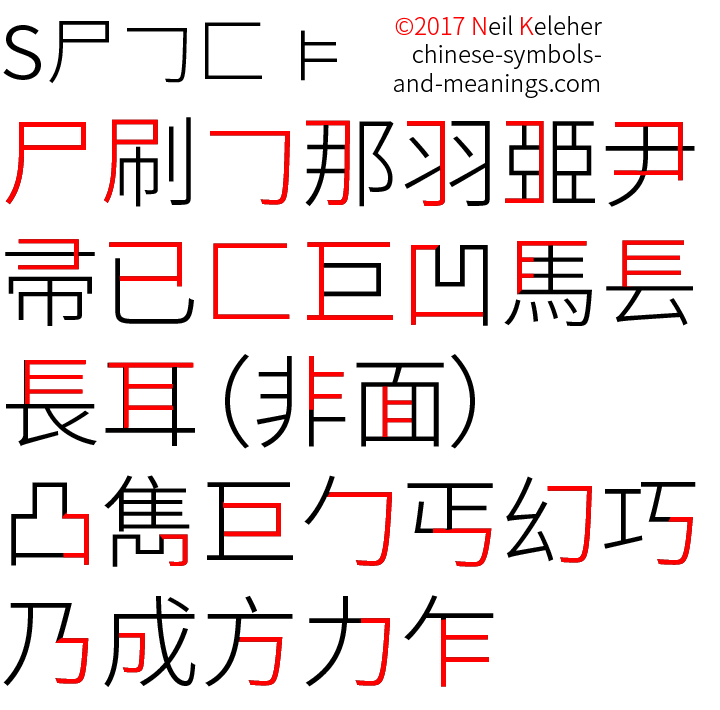 T, The element for t, 廿, looks like a t. But it also means Twenty. 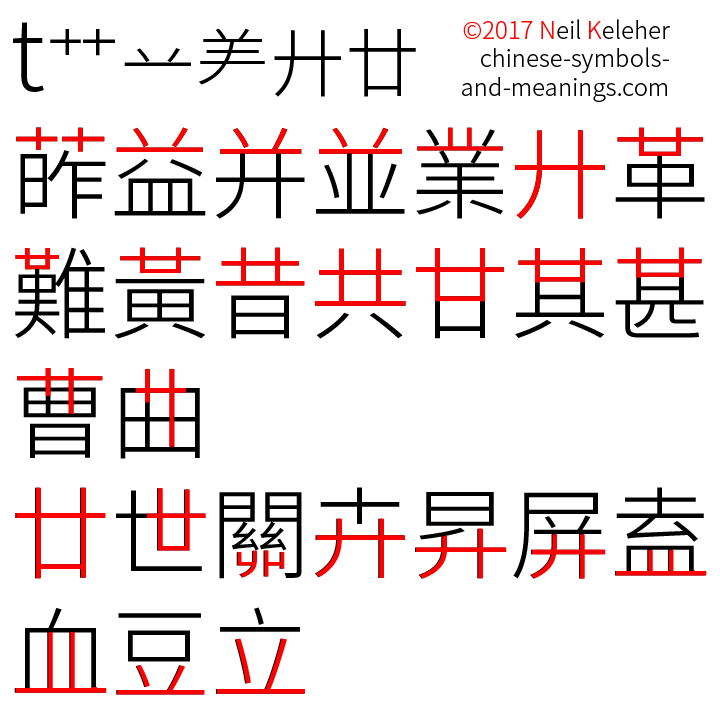 U, Likewise the mountain 山 element looks like a sharp edged u, but with a line down the middle.

V looks like the "point" in the character for woman 女.

w-田, see how Wide that field is

W, For field 田 and fields tend to be Wide. 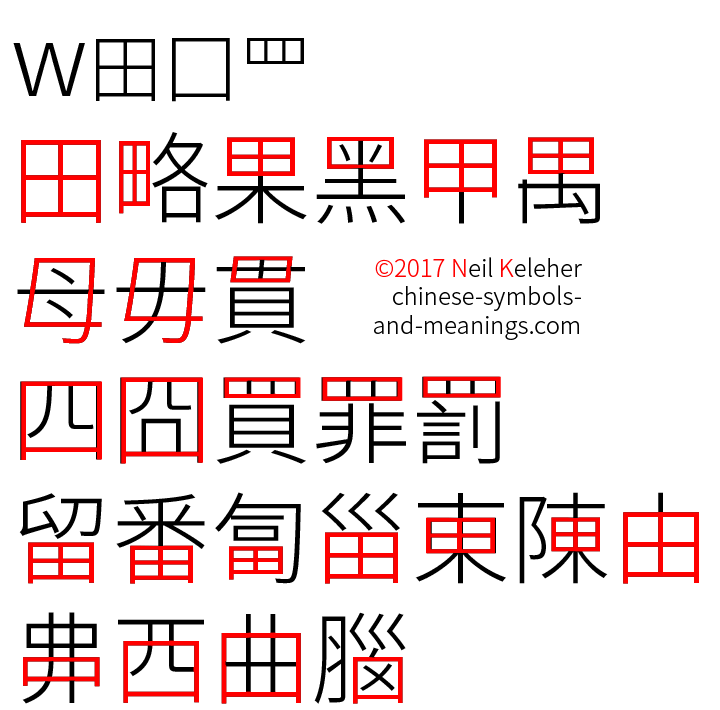 y-卜, an upside down Y